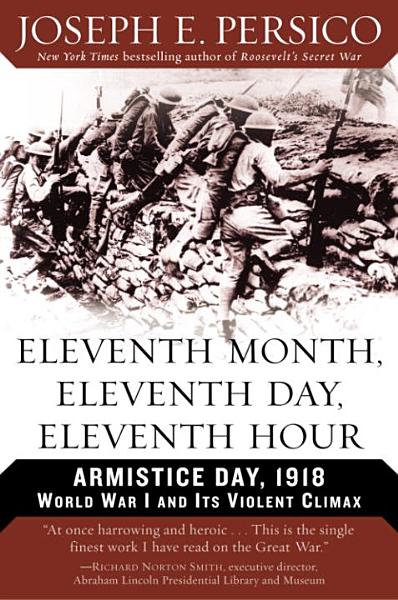 November 11, 1918. The final hours pulsate with tension as every man in the trenches hopes to escape the melancholy distinction of being the last to die in World War I. The Allied generals knew the fighting would end precisely at 11:00 A.M, yet in the final hours they flung men against an already beaten Germany. The result? Eleven thousand casualties suffered–more than during the D-Day invasion of Normandy. Why? Allied commanders wanted to punish the enemy to the very last moment and career officers saw a fast-fading chance for glory and promotion. Joseph E. Persico puts the reader in the trenches with the forgotten and the famous–among the latter, Corporal Adolf Hitler, Captain Harry Truman, and Colonels Douglas MacArthur and George Patton. Mainly, he follows ordinary soldiers’ lives, illuminating their fate as the end approaches. Persico sets the last day of the war in historic context with a gripping reprise of all that led up to it, from the 1914 assassination of the Austrian archduke, Franz Ferdinand, which ignited the war, to the raw racism black doughboys endured except when ordered to advance and die in the war’s last hour. Persico recounts the war’s bloody climax in a cinematic style that evokes All Quiet on the Western Front, Grand Illusion, and Paths of Glory. The pointless fighting on the last day of the war is the perfect metaphor for the four years that preceded it, years of senseless slaughter for hollow purposes. This book is sure to become the definitive history of the end of a conflict Winston Churchill called “the hardest, cruelest, and least-rewarded of all the wars that have been fought.”

Authors: Joseph E. Persico
Categories: History
Type: BOOK - Published: 2007-12-18 - Publisher: Random House
November 11, 1918. The final hours pulsate with tension as every man in the trenches hopes to escape the melancholy distinction of being the last to die in World War I. The Allied generals knew the fighting would end precisely at 11:00 A.M, yet in the final hours they flung

Authors: Joseph E. Persico
Categories: Armistice Day
Type: BOOK - Published: 2004 - Publisher: Vintage
The story of the day on which World War I, the war to end all wars, ended. Using military archives and public records, along with journals and diaries, the book will weave together the eleventh hour experiences of the famous, such as Lloyd George, President Woodrow Wilson, Field Marshall Haig

Authors: Mary K. Pratt
Categories: Juvenile Nonfiction
Type: BOOK - Published: 2014-09-01 - Publisher: ABDO
This book explores the causes of and events leading to World War I. Easy-to-read, engaging text discusses major battles and key figures of the war and the technology and weapons used during the war. Through primary source quotes, readers will discover the experiences of soldiers and people on the home

The Greatest Day in History

Authors: Nicholas Best
Categories: History
Type: BOOK - Published: 2009-09-22 - Publisher: Public Affairs
Follows the events that led up to this historic cease-fire, including the week of negotiations, military offensives, and the thousands of additional casualties, that brought a final conclusion to one of the deadliest wars in the twentieth century.